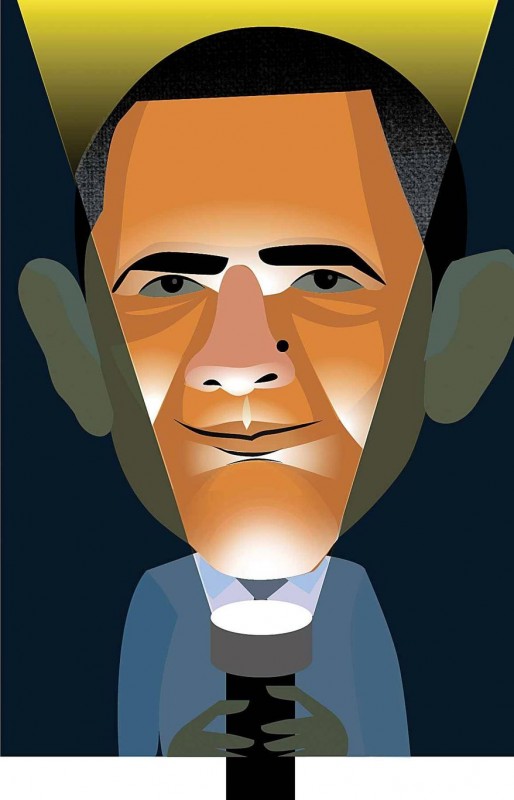 The most memorable line in President Obama’s Oval Office Sunday speech was his declaration that “freedom is more powerful than fear.” That epigram might have made John F. Kennedy’s speechwriters beam. But it is ludicrous to hear such a comment from a president who has spent almost seven years fear-mongering to promote one federal power grab after another.

Mr. Obama has done more than any other president to sway Americans to perceive all gun owners as threats to public safety. The president declared, “Congress should act to make sure no one on a no-fly list is able to buy a gun.” But the no-fly list has long been a parody of due process: Federal Judge Anna Smith ruled last year that it was unconstitutional and recognized that “international travel is a necessary aspect of liberties sacred to members of a free society.” Mr. Obama’s proposal is especially perilous to freedom because his administration is placing innocent Americans on the no-fly list based solely on a hunch that they might someday commit violence. If Congress enacts Mr. Obama’s proposal, then the absurd judgments of one government agency would provide a license to ravage victims’ other constitutional rights — and perhaps also to tacitly identify gun owners with terrorists.

Mr. Obama perennially invokes the threat of terrorism to cloak illegal government surveillance. When Edward Snowden exposed how the National Security Agency was ravaging Americans’ privacy, the president responded by portraying any threat to the federal data vacuum cleaners as pre-emptive surrender to terrorist cabals. This past May, when Congress dallied before renewing the Patriot Act, Mr. Obama issued an apocalyptic warning: “Heaven forbid we’ve got a problem where we could have prevented a terrorist attack … but we didn’t do so simply because of inaction in the Senate.” Mr. Obama signaled on Sunday that he believes that new threats justify government restrictions on the use of private encryption of email: “I will urge high-tech and law enforcement leaders to make it harder for terrorists to use technology to escape from justice.”

After federal officials failed to detect a plot by the so-called underwear bomber in late 2009, Mr. Obama authorized the Transportation Security Administration (TSA) to become far more aggressive and intrusive. He declared in 2010 that he had asked the TSA for confirmation that “what we’re doing is the only way to assure the American people’s safety.” Commenting last month on the downing of a Russian airliner over the Sinai peninsula, the president declared, “I think there is a possibility that there was a bomb on board, and we’re taking that very seriously.” But the TSA’s bomb detectors are routinely triggered by hand sanitizers and other commonly used items, and TSA’s Whole Body Scanners failed to detect 96 percent of the guns and mock explosives that inspector general agents attempted to smuggle past them. But as long as Obama administration officials can invoke vague threats, Americans’ Fourth Amendment right to be free of warrantless, unreasonable searches is null and void.

When Congress was considering the Affordable Care Act, Mr. Obama and his officials repeatedly vastly exaggerated the number of Americans without access to health care. They sought to sway citizens to believe that the only alternative to the president’s plan was to permit millions of Americans to suffer horribly, perhaps dying in the street. Mr. Obama promised that his health care program could expand coverage and curtail spending. There was no way to simultaneously increase demand and slash costs except by decimating freedom. Millions of Americans’ health insurance policies have been canceled as a result of Obamacare.

The president’s rhetoric on climate change is perhaps his most blunt fear-mongering. In a September speech in Alaska, Mr. Obama warned that without sweeping economic and environmental policy changes, “we will condemn our children to a planet beyond their capacity to repair: Submerged countries. Abandoned cities. Fields no longer growing.” But while he talks as if climate change is a self-evident truth, the administration is refusing to disclose key data from its top climate research agency to House Republicans who suspect the administration is fudging numbers to promote the president’s agenda. As the evidence for global warming becomes shakier, he is castigating anyone who rejects his iron-fisted, purported solutions.

Mr. Obama is correct that freedom is potentially more potent than fear. But we must recognize how politicians profit from fear-mongering more than any other group in our society. And if enough Americans can be frightened, then all of us will be further subjugated.